Did I mention that Joe wasn't all that interested in becoming a beekeeper?

It seems the bees (or the universe) had other plans. All my time away this summer made Joe the accidental beekeeper. I think he got to know them better than me…. and he got to know my our bee mentor, Wayne, while they chased swarms, combined hives (again), and checked on the hives progression. I was kind of jealous and happy all at the same time. Joe was the first to know we would get some honey……. and said they would wait for me to get home to harvest it.

Joe is still the safest of the bunch…. fully geared when interacting with the bees. One bad wasp sting will do that to you. I'm a little less cautious, ditching my gloves for inspections at times. Wayne is usually out there pulling hive bodies apart with a veil over his head at most, short sleeve shirt, never wears gloves….. and this time while helping us pull honey supers to extract he had no protective bee gear at all. He got stung at least twice and seemed to barely notice. Once he told me it helped with his arthritis…. Sophie thinks he is one of the bravest people she knows. (and yes, she is in a full suit with gloves out there) 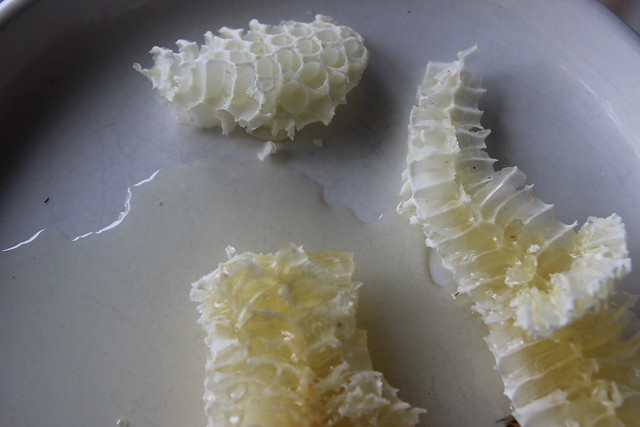 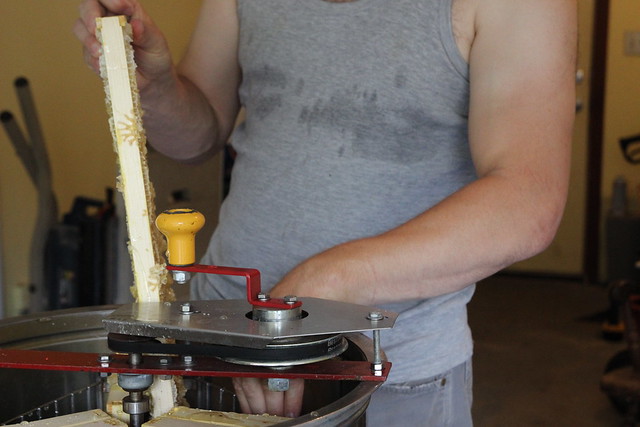 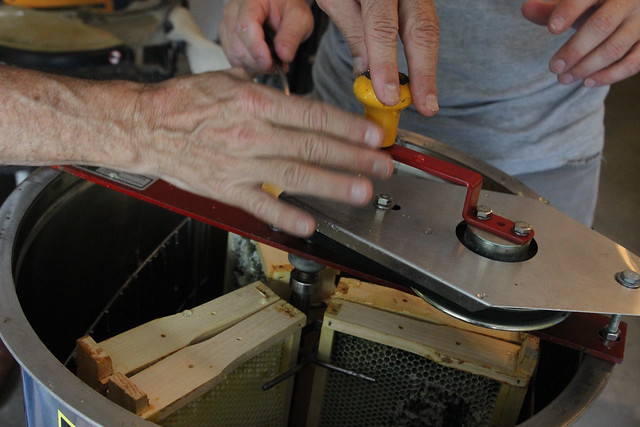 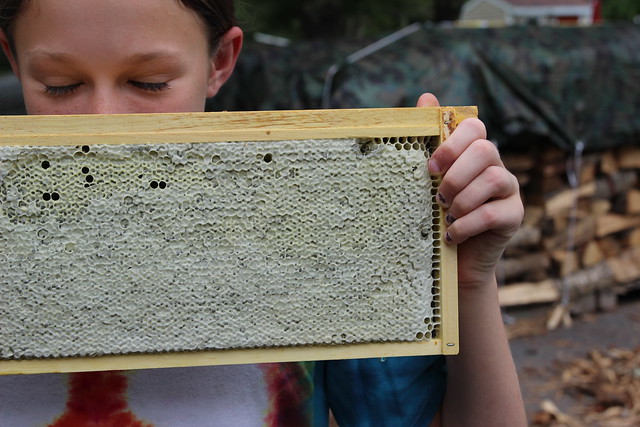 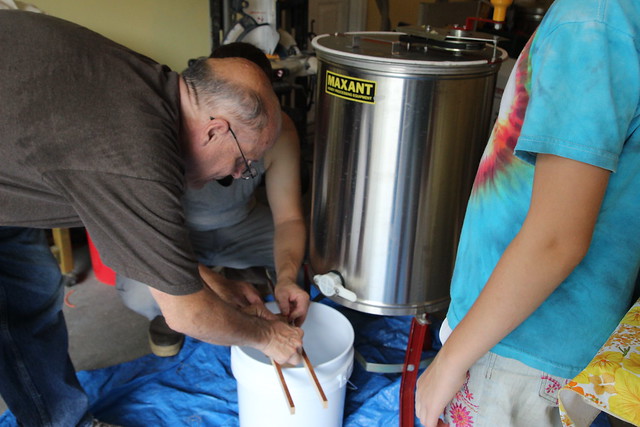 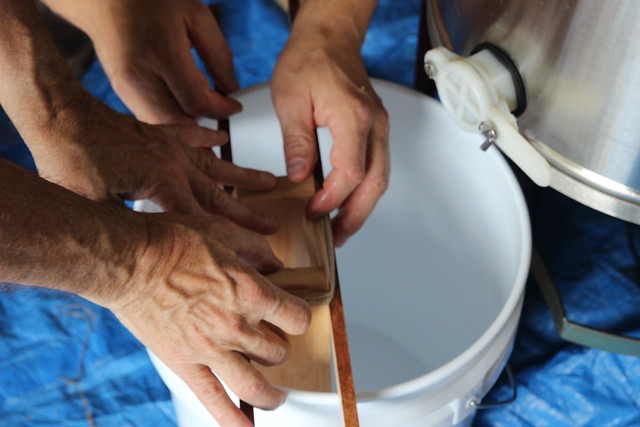 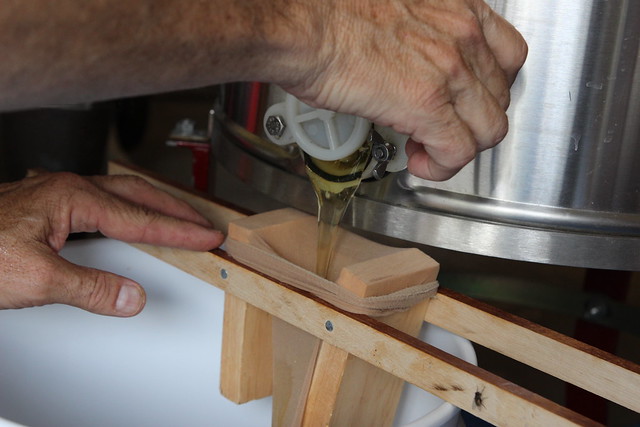 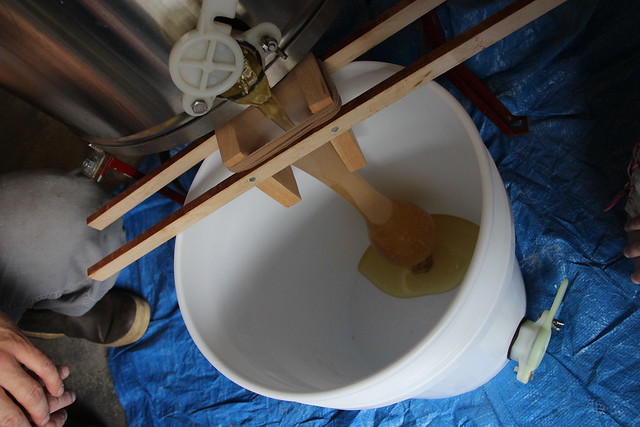 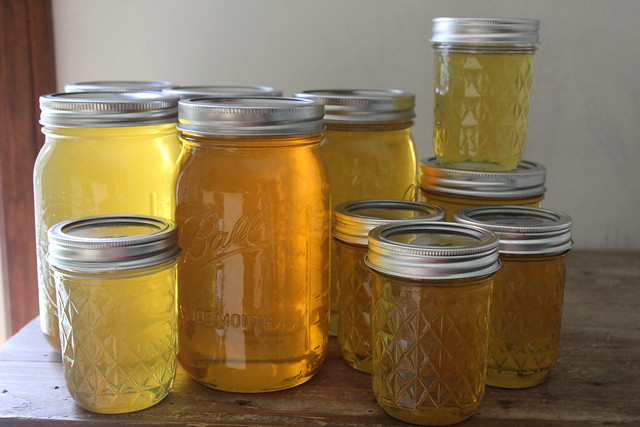 It's lucky to get honey the first year. Of course, it helped that this hive's neighbor had a failing queen in the spring and therefor got combined into one huge hive early in the season.

Just a few days after I was home, Wayne told me a list of what we needed to extract : the club extractor, a bucket, a contraption he built, and a knee high. He was bringing it all. At first I had no idea what he meant by knee high. Shows you what kind of lady I am. It's just a nylon sock. Turns out they still make those. He builds that little wooden tool for everyone he helps. With a knee high stretched over it, the wax is filtered out. Simple, cheap, and genius.

We took 9 frames from the hive to extract. It was a warm afternoon which made the job easy. I can't even describe how sweet it smelled while we were working, chewing on bits of bur comb filled with honey. Bur comb is irregular bits of comb that you have to scrape off to keep things nice and tidy inside the hive. Extracting is a sticky job and you end up with bits of honey everywhere no matter how you try not to. Especially when we were getting the last bit of honey out and Joe handed me a spatula and said, you are the only one who can scrape the inside of that extractor out. Honey up to my shoulder, but we got the last cup out. We bottled two gallons of pale golden honey. It's got a strong but delicious floral taste…. so much different than anything I've ever had. Summer in a jar.