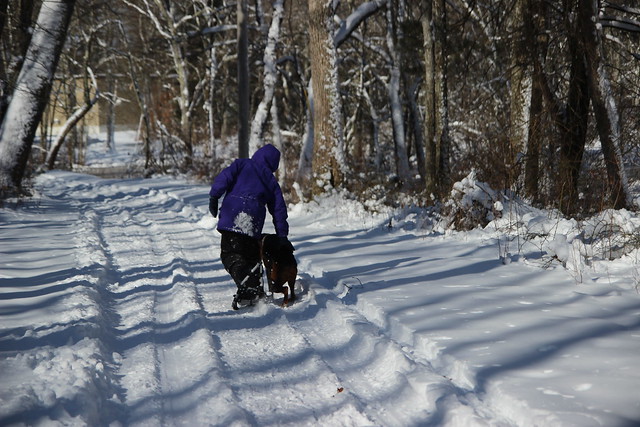 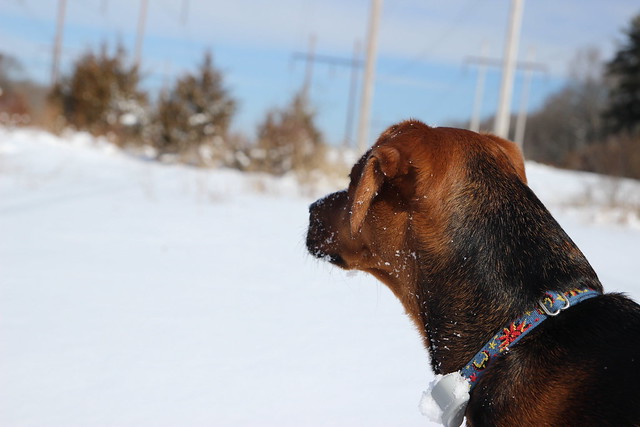 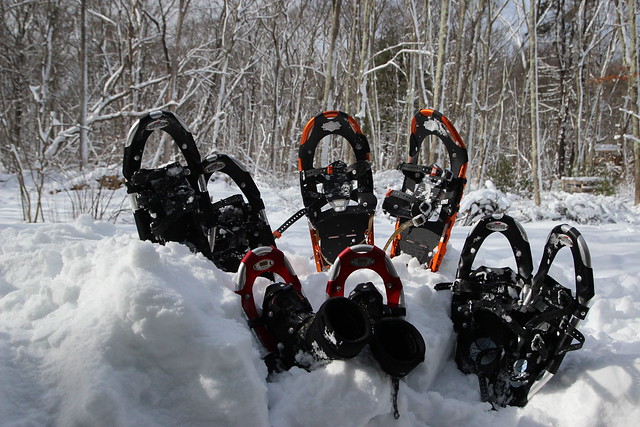 Joe was in NY with the little kids when that pesky groundhog predicted 6 more weeks of winter. So far, Punxsutawney Phil has been right. We've gotten at least six inches of snow every week since. The weather is calling for warm days through the weekend. Up into the 50's. And guess what on Monday? 31 degrees and snow showers. Oh boy! As a random side note, when Sam was about 3 he learned about Punxsatawney Phil (pronounced pux-a-tawn-y), and he reversed the beginning sounds on the two words. Resulting in a rather surprisingly named groundhog, said with an incredibly cute 3 year old lisp. My sister-in-law still laughs about that story. I think she may have encouraged him to tell Grandma about Phil too….. Grandma also thought it was great, of course.

Back to the snow though. We've had a lot of fun in it. Snowball fights, snowmen, snowshoeing. Notice how Luke takes his snowshoes off in the second to last photo…. he slips his boots off with the snowshoes still strapped onto them. So funny. My arms have gotten a workout from the shoveling. I actually really enjoy shoveling snow. Crazy, right? But I really do. Joe & I tend to shovel every few hours…. instead of waiting until we're buried we do "damage control" during the storm. One of the most peaceful sounds in the universe is shoveling snow at 11 pm on a Saturday night. I'm serious…. everything is so quiet. You can hear the snowflakes land if they're the really big ones. It's magic.

We took Maggie for her first snowshoe trip and she was unleashed the entire time. She listened so well. Heel, leave it, the works. I usually bring a training collar (it beeps if she gets too far ahead). But the batteries were dead so we just went without it. While I'd love to think the time I've spent training her has something to do with it (thank you Cesar). The truth is, I'm just lucky. She's such a sweet eager to please dog. She stayed right with us & even resisted the urge to follow fresh deer tracks into the woods. Have I told you I love this dog? I mean seriously, I love her.

Out in the field her hound nose got the best of her. She could not resist rooting in the snow, full head buried, to sniff our some sort of rodent. She favors moles here at the house. I've no idea what she was after in the field (she still listened and stayed close) but she was hilarious to watch as she rooted and snuffled through it. I've never had a dog so led by her nose. We have no idea what she is for sure, but there is definitely some hound blood in there. What a funny girl….

I guess that's all for tonight. Today was one of those insane days. Sophie started violin/fiddle lessons, we made a trek to the feed store, grocery store, 4H, writing club, picked two teenagers up from friends houses, and Joe has the big girl out tonight at an open mic at a local music store. I was beat by the end of the day. I served everyone salads loaded with tomatoes, cheese, & olives and fresh irish soda bread & butter for dinner. Easy. Cheap. Guilt free.

The little two begged for Harry Potter 2 at the library and they just started it. This means for the next hour it is just me, a splash of bourbon, the fire, and some knitting. Pretty much the perfect way to end this busy day…..

ps ~ some fun for you knitters. that is one well traveled hat above. knit in louisiana three years ago (oh my!), snowshoeing in alaska, and now a brief snowman hat in massachusetts…..